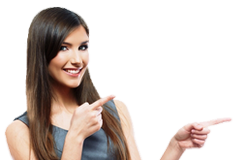 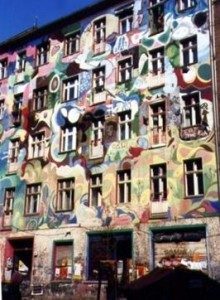 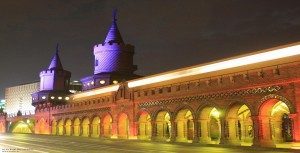 This district hosts a few of the most well-known and attractive residential areas of the city. The ´Samariter quarter´, for example, with its period buildings and attractive sometimes quaint shops, is a very much sought after living area for students and more over for young families, who enjoy the good social infrastructure and relax atmosphere in this neighborhood.

In Simon-Dach-Strasse we find the most sort after streets of Friedrichshain with maybe the largest variety of restaurants, bars, clubs and – on top of that – the possibility to dress up accordingly in one of the many small boutiques. Going out here is relaxing and quickly makes you feel at home thanks to the open mindedness of the people and the beauty of Friedrichshain.

Besides that a lively and exciting culture scene has developed, often exposed in locations as former commercial units, or, in case of RAW, in old out of use engine sheds which invite to organize expositions and performances. It would be practically impossible to make a list with the best event or party locations.

In between the period building neighborhoods, we find a huge architectural monument: the impressive boulevard of the fallen socialism. The once called Stalinallee was built after Moskauer example in the architectural style `Zuckerbäckerstil`. The excessive usage of space combined with the many statues of the labor heroes are a one of a kind aesthetic witness of this period. The Karl-Marx-Allee, as it is called nowadays, runs from Friedrichshain to Alexanderplatz in an impressive straight line and offers a wonderful view with the Fernsehturm (television tower) as central benchmark at the end of the boulevard.

There is another place that probably made an even bigger contribution to the popularity of Friedrichshain, The East-Side-Gallery. It is the largest part of the wall still kept in Berlin, illustrated with art work conserved for 20 years. It runs parallel to the river Spree and is an attraction for travelers from all over the world. Where once the border police used to prohibit access, now beach bars and clubs with their private terraces at the waterside are the decor for a liveliness which is a strong contrast to the history that the wall represents.

In Friedrichshain lays the largest Hall for sport events and concerts in Berlin: the O²-World is also the home base of Germany´s most successful basketball and ice hockey team – ALBA Berlin and the Berliner Eisbären – who regularly play a competition here.

The Volkspark Friedrichshain isn´t just another green area, but one of the most varied parks of Berlin: the largest offer of spare time and sport possibilities one could imagine in a city park. Whether it´s inline skating, jeu de boules or beach volleyball, a visit to the open air cinema with its widely appreciated wonderful atmosphere or a drink in one of the two bars, it´s all up to you! Besides that this park is a beloved place to wander and to stroll. It offers pleasant places to relax like the Japanese shrine at the waterside or at the Spanish warrior statue.
You probably already know that Friedrichshain is situated in between two other very attractive districts, Kreuzberg and Prenzlauer Berg, but are you aware of the fact that it´s just a stone´s throw away to the inner city? Very easy and attractively accessible by bike. Public transport is at your disposal at the largest above ground train station of Berlin – Ostkreuz – offering direct connections to literally every part of the city. But also the Warschauerstrasse station for both under and above ground trains and many other public transport possibilities as well as the Ostbahnhof for travelling outside Berlin ensure a well connected and easy accessible Friedrichshain. And this will be even more attractive once the international airport BBI will have a direct connection to the center via station Ostkreuz.

But let´s come back to the wonderful atmosphere of Friedrichshain once more, it´s the youngest of Berlin’s districts and its attitude to life lies between relaxing, open minded, innovative and a historical charm indicated by the idyllic period buildings and the utopian architecture. Whether you meet your friends at the lively scene of Boxhagener Platz, you visit a world star concert or you take your children to one of the many playgrounds in the neighborhood – this is exactly the mix that makes many people decide in favor of Friedrichshain, as well the ones looking for a new home as investors.